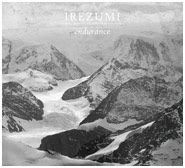 The French label says Irezumi, at 21, is «quite possibly the best ambient artist of his generation», which might be justifiable claim: how many ambient artists are there anyway at that age?
Like young Thomas Köner once did, in his first album "Nunatak Gongamur", Irezumi is inspired by the tragedy of the Antartic expedition of Ernest Shackleton. Music-wise there is indeed a bit that refers to the classic Köner album, but Irezumi does things a little bit different. He uses software, synthesizers (analogue or digital), guitars and spoken word samples to generate a densely layered pattern of ambient sensibility that has a strong feeling of chilly air, freedom but also loneliness, a bit like the mountains that are photographed on the cover. A few persons walking up mountain, among lots of rocks and snow. Dark but not too dark. Grey sky with a touch of blue - that kind of feeling is what comes of this release. The voice samples that of a low voice, which reminded me of the KLF's "ChillOut" (when did I last hear that - makes note here to listen again) and music wise the Space album out of the same KLF home. None of the rhythms are apparent. Space is suggested by the extensive use of reverb, which is not always something I like very much, but Irezumi keeps things neatly under control.
Like said, the best ambient artist of his generation might be a claim to soon; it's a fine idea to keep ears open for whatever else he has to offer, but as a start, yes! "Endurance" is a very mature sounding CD and makes a perfect start.
[CD by Snow Blood]
Frans de Waard / Vital Weekly
Photos: R.R.

Seeing that Franz is selling this CD (on his private catalogue), I am not even sure he actually listened to it. No I think not.
You see, this complex release out on SNOWBLOOD was acclaimed as a masterpiece by everyone except him. Strange isn't it.

Support the label, they are my friend:

Thank you for your comment. I must say, though, that the review is published at GPInformation under the permission of Frans/Vital Weekly, to who I give my most sincear and public thanks. All the opinions and considerations in the posted articles should be credited to him, so the replies to it should follow the same way.

a pity that 5tark can't spell my name right, but after hearing everything I sell everything. The reason is two-fold: a) I can't keep everything and b) I do sell things in order to support my own time to Vital Weekly, which has no financial support whatsoever (or in fact myself, for that matter), so I must do this in order to devote my 16 hours a day working on Vital Weekly. And if the review is lukewarm the pavlov response is always: oh you didn't hear it.
to make clear: read www.vitalweekly.net/fga.html to read more about this (and other topics). the fact that i sell things is not really hidden. everybody who sends in material should have read this, and approved. otherwise don't bother

A CLARIFICATION FROM STARK:

«Someone wrote a stupid comment under Irezumi - "Endurance" review posted on your blog. As I see, he used also my Myspace. Well, that wasn't me. Since today I didn't even know that such blog as yours exists. I received a message on Myspace from Frans about that, and I felt really embarassed. I won't deny, I am Snowblood friend, it isn't any secret,but if I would have any objections against Vital Weekly review (which in fact I don't have, it is a good review), for sure I wouldn't write such a silly and childish comment.»