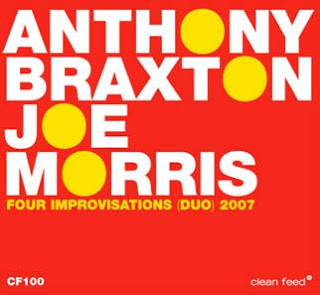 Last month, Portuguese referencial jazz label Clean Feed achieved another goal: its one hundredth release.
This historic edition is a four-disc set that features two extraordinary musicians who before this session had never played together: multi-reedist Anthony Braxton and guitarist Joe Morris. “Four Improvisations (Duo) 2007” has other unique qualities.
One is that Braxton has rarely recorded completely improvised pieces. More typically he plays compositions, his own or occasionally jazz standards, and improvises within their structures. His compositions can include open forms and spaces that require creativity of himself and his fellow musicians, but it is structured music. Morris, conversely, more frequently improvises freely, but he also often works within the parameters of composed pieces.
On these discs, each one a continuous improvisation of approximately one hour, Braxton and Morris play free. We hear them discovering each other’s thought processes and musical strategies, while negotiating common places to interact. This first-time, marathon meeting follows in the tradition of other the duos between collaborations between woodwind master players and six-strings virtuosos, such as Lee Konitz and Billy Bauer, John Coltrane and Kenny Burrell, and Evan Parker and Derek Bailey.