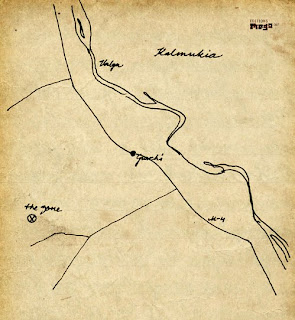 The word "hobby project" is a word I don't particularly like. It sounds like something is not serious or for plain fun, without too much effort. With various releases as Angel, it's probably safe to say that Angel is no longer the hobby project of Ilpo Vaisanen (from Pan Sonic), Dirk Dresselhaus (Schneider TM) and since their last CD also Hildur Gudnadottir (Lost In Hildurness, she also plays on the latest Pan Sonic release) - it's as much a real thing as their "main" occupations.

Four lengthy cuts here of guitar, cello and loads of electronics - loads as in many, but they are not used all the time and to the same extent.
The pieces are rather empty, like a dessert can be empty, yet full of sand, if you look at the detail. "Kalmukia" seems like a concept album, with the four pieces linked together. It moves away from the previous, much louder and fuller releases. More is less it seems. The empty music is not always bright, or rather: hardly bright. This is not black but grey music - an area in between the sun doing down, or autumn changing for winter. In between space music. The music howls about like cold wind over the tundra - perhaps a better reference than a hot dessert. Cello and guitar strum about, while the electronics shiver in the background.

A bit of raw and a bit quiet. Very nice, this grey and cold winter music.