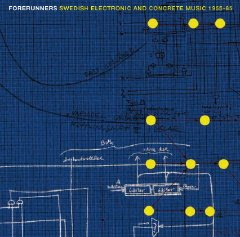 So I might have said that I don't like compilations, but there is always an exception or two, and compilations with historical material I always like. Sub Rosa's “Noise Anthology” series is a fine example of a great historical series.
I am not sure if “Forerunners – Swedish Electronic And Concrete Music 1955-65” will be a series also, but this is a very nice compilation, which includes extensive liner notes and photographs of serious looking men behind old tape machines. Of course included is the man who was the first to create concrete music in Sweden, Rune Lindblad, who started experimenting with film and sound in the fifties – and whose career has been well preserved on CD. Of the other names, I recognized only Sten Hanson and Lars-Gunnar Bodin, who had their work released on Fylkingen before (well, maybe the others too, but then I may forgot about it).
All of these pieces, eleven in total, sound very much like you would expect them to do: oscillators, sine waves, tape manipulations and sometimes crude editing techniques make up some wonderful rough electronic music. Leo Nilsson's “Skorpionen” sounds almost like an industrial piece of music, but it’s from 1964 (created with the help of Erkki Kurreniemi). Not always the compositions are that great, but the sheer experimentation makes up wonderfully well. Nice text pieces too by Hanson, Bengt Emil Johnson and Lars-Gunnar Bodin. Also includes work by Ralph Lundsten, Karl-Birger Blomdahl, Bengt Hambraeus, Arne Mellnas and Ake Karlung.
Very nice, and hopefully more to come. And an example for other countries too.
[CD by Fylkingen Records]
Frans de Waard / Vital Weekly
Image: Fylkingen