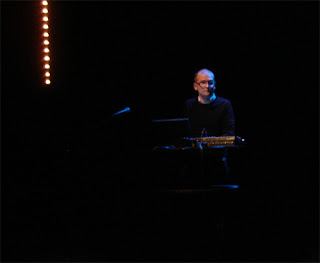 The man behind Vaimous is one Johan Sandsjö, who still uses software he downloaded to his 486 computer in 1998, when the Swedish government started a program of bringing PCs to their civilians.
The pieces on this CD were recorded over a long period, from 2003-2006, and they were recorded to be played live. Thirteen relatively short electro pop tracks are to be found here: stomping rhythm box, fat bass and vocoder vocals. Maybe it lacks some variation here and there, but throughout it's a very pleasant listening. I was reminded of good Suction Records releases (whatever happened there?) and releases of Swedish Slowball label - which also seems very old by now.
But that doesn't mean that this sounds old or worn out, Vaimous brings quirky uptempo electro-pop punk and it's great. A small strip of sunlight on a rainy day.
[CD by Empop]