Destillaat is a yearly exhibition of young artists at Extrapool, taking the form of video, installation, painting, printing and in some cases music. To distill the new talent from the various art schools in The Netherlands.

One of this year' s participants was German's Iris Ollschewski, who asked a whole bunch of people that at one point or another played at Extrapool to send in some sounds from which she would distill a composition that was played on four speakers in a small room. Thirteen people responded positively and Iris composed a six minute piece out of that. It's hard to believe that it comes from such diverse sources, even when Iris applies collage like methods to create the piece. The various sources flow quite naturally into eachother and form a coherent music composition of little over six minutes, also when "reduced" to a stereo mix.

Comes with a nice cover and limited to a few handful copies. Completists for the works of say Roel Meelkop, Harald Sack Ziegler or Machinefabriek should pay notice! 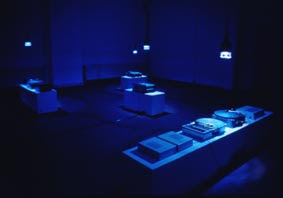