The “It” series, by Crispin Hellion Glover 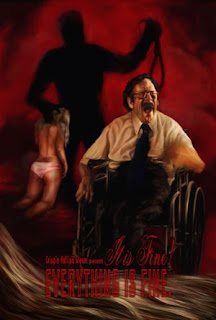 Currently on presentation in several cinemas and theatres throughout the USA, “It is Fine! Everything is Fine.” is the part two of the “It” Trilogy, by veteran actor Crispin Hellion Glover, who has appeared in over 30 films, including “River's Edge”, “Charlie's Angels”, “The Doors”, “Willard”, “Dead Man”, “Back to the Future”, “What's Eating Glibert Grape”, “Wild At Heart”, “The People vs. Larry Flynt”, as well as the more recent “Beowulf”, “The Wizard of Gore” and “Epic Movie”.
In this production, Glover collaborated with Utah writer-actor Steven C. Stewart, who also appears in “What is it?” the first film of this feature series. Stewart passed away from complications from cerebral palsy in 2001.
One important element on this film is the soundtrack, which makes use of Wagner and Bartok excerpts to ironic effect, as well as tracks by late Church of Satan high priest Anton LaVey, Charles Manson and a country track by Klassic Klan recording artist Johnny Rebel. Let’s not forget that Glover is a musician himself, having issued the “The Big Problem does not equal the solution. The Solution equals Let It Be” album, which can somehow be considered as the sound version of his very own imaginary. 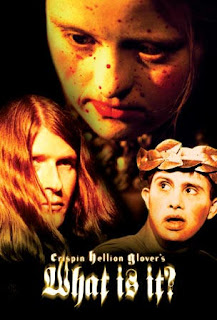 Known for creating many memorable, incredibly quirky characters onscreen as an actor, Crispin Hellion Glover's “What is it?” – his first effort as a director – does not disappoint the fans of his offbeat sensibilities and eccentric taste.

Featuring a cast largely comprised of actors with Down Syndrome, the film is not about Down Syndrome. Glover describes it as being «the adventures of a young man whose principal interests are snails, salt, a pipe and how to get home, as tormented by an hubristic racist inner psyche». He also explains that the film is his psychological reaction to corporate controls of expression limiting the exploration of taboo.

In addition to writing and directing “What is it?”, Glover also appears in the film as an actor in the role of «Dueling Demi-God Auteur and the young man's inner psyche».

Fairuza Balk voices one of the snails.