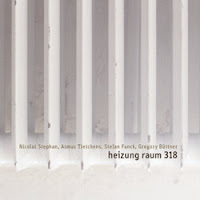 Perhaps the sensation of a low humming sound that is not annoying is something that many readers will recognize. I once slept next to a refrigerator, but was fascinated all night by all the sounds it produced.

Room 318 is the name of a room in the building where Asmus Tietchens teaches sound at the University of Applied Science in Hamburg and “heizung” is the German word for “heating”. Except that it doesn't produce heat, but it makes a nice whistle. By turning the knobs of the radiator the whistle changes.

Since the three persons (or took) classes with Asmus Tietchens have paid close attention to the old master, it's a small step of recording the radiator – actually, all three of them – and turn them into music, along of course with an exercise by the master himself. The original source material is at the end of the CD, and the crude whistling makes it hard to believe that it leads to the preceding seven sound pieces.

It's easy too assume that all of these composers work with computers these days, and that one could also wrongly assume that their pieces would sound similar. This is not the case. Each of them approaches the source material in a different way, and this leads to quite interesting pieces of music. Asmus Tietchens delivers a piece of his trademark style processing: silent but loaded with small sounds and even a rhythm of some kind. Gregory Büttner applies the recent Tietchens methods (his “Menge” series) into a well-crafted piece of sizzling electronics. But there is also the more industrialized noise of Nicolai Stephan and Stefan Funk (especially in his last two versions; he has four in total), who take an entirely different route in their approach. Their music is closer to noise than to microsound, but they make a nice variation on the matter.

Quite a nice compilation altogether. 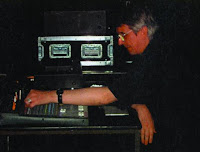