Kings of the sound beehive 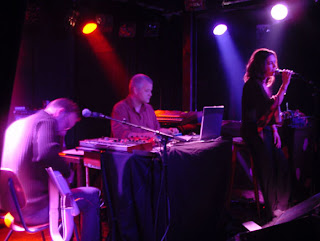 When talking of dutch alternative music, it is just impossible to detour from Beequeen, and, consequently, one of its creative halves, Frans de Waard. Which also means approaching other projects and subjects. GPInformation has the pleasure to present the direct speech of its favourite collaborator.

First than all, a contextualization. When, where and why did the Beequeen project began?
Frans de Waard (FdW): We met in 1988, when Freek [Kinkelaar] contacted me believing I was a hardcore Legendary Pink Dots fanatic. Little did he know. We did share a taste in adventurous music though and soon we found ourselves listening to cassettes filled with strange music for hours. Not long after that we met up. We decided it would be a good idea to see if we could produce music together. This became the “Mappa Mundi” cassette.
Which are the main concepts behind Beequeen's sound work?
FdW: There isn't a concept as such. Beequeen is about two people making music together. As our lives, environments or musical tastes change, the music changes as well. This makes Beequeen a bit like a soundtrack to our lives.
Taking in account the longevity of Beequeen's career, which are the clearest evolutions and differences you would point in its production, throughout the years?
FdW: Probably the clearest evolution (also for the listener) would be after we'd produced “Treatise”, and we realised we could make music like that for ever if we wanted to. We didn't, so we let our love for the "song" influence our music. Thus “Ownliness”, and then “The Body Shop”, were born. Another – perhaps more subtle – changing point for us was when we did “The Surrough Gate”, which was a definite step forward when it came to recording and composing.
How is to work to another person – in this case Freek Kinkelaar – for such a long time?
FdW: Actually I work with more people, like Peter Duimelinks and Roel Meelkop, and also for quite some time, so it's not odd. I like to work with people who do something else than I do, or can play a real instrument. Freek can really play a tune or two. I can't.
Surely you are two very different persons. How do those differences reflect in Beequeen's final result?
FdW: We are indeed very different persons, but we also share quite a lot. We do have a long history together. There are times when we annoy each other profusely, but we also make up a lot and have a lot of fun together. We've known each other for 19 years, so we know a lot about each other. It is a bit like a marriage.
You never were a "one-project man". What side work are you maintaining these days, besides Beequeen?
FdW: I do Goem solo these days, since we have a hard time finding time to work as a trio. I do Freiband and a bit of work under my own name. Not much.
The dutch avant-garde/experimental/outer limits scenario was always quite interesting (with Staalplaat being, probably, its strongest "magnet"). What’s your vision on the role that you – Frans de Waard – had and still have on that same cultural scenario, through your activities?
FdW: Hardly, I think. I am not part of any scene. To some scenes remotely and do things, but more on a consulting level than on creative level, like some of the “work” I do for Extrapool, in Nijmegen. But I am not part of the noise scene or the official avant-garde posse. We (Beequeen, Kapotte Muziek and its varying members) are all outsiders, I guess.
On the other hand, how do you, as a citizen, see the present days in The Netherlands, both from the artistic and social points of view? Has the country changed?
FdW: The populist movement is quite strong, but people have very little understanding of the word “freedom”, whereas they call for new oppression. Not for themselves but for others. Sad, but the case. I am sure it will change in the future. No repression is ever lasting. 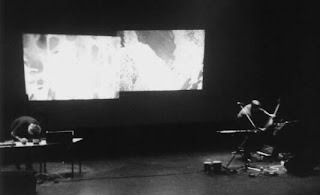 Focusing on sound production, what is Beequeen preparing for the near future?
FdW: We are currently working on the final mixes of the new Beequeen studio CD, entitled “Sanddancing”. This is an evolvement of our work with “Ownliness” and “The Body Shop”. We are both very excited about “Sanddancing”. It is probably the best of this trilogy.

Can you advance some more details on the "Sanddancing" production, as well as on its sound?
FdW: It's not a unified thing. It's a new album, the third more pop, like one. Like with “The Bodyshop”, we gave the rough recordings to Erik Drost, former guitarist of the Legendary Pink Dots to shape it, take out some unwanted hiss, put things in its place and mix it. “The Bodyshop” was already great, but this new one is more a unified whole thing.

What are you planning for your other projects?
FdW: I'd love to do a new Goem CD, when I have time to work on it. Roel and me completed a CD as Zebra which nobody wants to release. Roel, me, Guiseppe Ielasi and Howard Stelzer will have a CD on Port, in Japan. Beta-Lactam Ring is supposed to release five CDs from me (three as Freiband, one as Shifts and one as Frans de Waard), but it's unclear when that will happen. And I started to release CDRs again under My Own Little Label, which I think is great fun.

Are you releasing just your own work, or do you also publish other artists?
FdW: Well, if I wanted to release other people's work on My Own Little Label, I would have surely called it Our Own Little Label, which I didn't. My = me = me. And, oh, there are releases from very close friends who have as little faith in the music industry as me, such as Roel Meelkop. I even will release shortly a business card CDR from my eight year old daughter, who did some field recordings and composed a small piece of it. Korm Plastics and Plinkity Plonk will, of course, continue to release music from others.

Speaking of other persons, you once mentioned to have being involved in the return of Steven Stapleton/Nurse with Wound to live performances. What can you say on that?
FdW: I worked in 2004 and 2006 for the Earational festival, and it wasn't my action, but the festival director got Steve out of his place and present a surround sound mix of “Salt Marie Celeste”, by Colin Potter. Now they are everywhere, but nobody credits Earational. They also did the comeback of The Hafler Trio in 2003, but then also there others take the credit.

This last question brings us to your own live presentations. How would you describe a Beequeen concert, if possible?
FdW: We play once a year, so what can I describe? Two guys on stage, one plays a laptop and one a guitar. We don't dance around.
Nuno Loureiro
Photos: R.R.